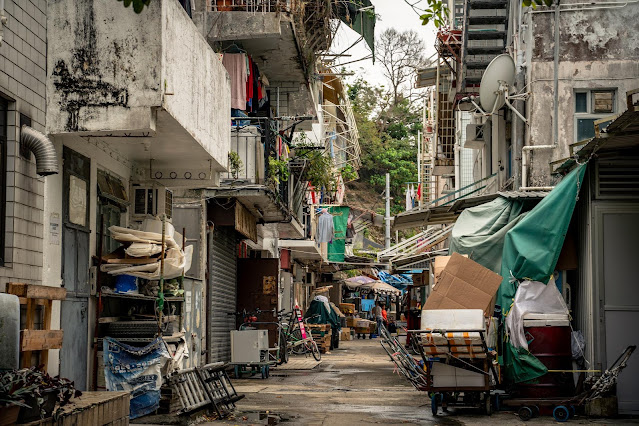 Although that feeling of uneasiness didn't pass, it did eventually give way to overwhelming tiredness.  I tried to stay awake, but the events and emotional roller-coaster of the past few days had taken a toll, not only on me but on the both of us.

They say that being caught up in cataclysmic events either strengthens the ties between you or fractures the relationship, and it seemed to me that whatever I might have thought existed between us, was probably not there at all.

So much for a pleasant few days in Hong Kong planning Suzanne's little games.  I guess even she could not have predicted what had happened.

I looked over at Madeleine, and in the dingy light, looked asleep.  I could only imagine what she was feeling about all of this, a brother that may or may not have been involved, and a friend who didn't seem to be a friend by making wild accusations about a brother she obviously cared about

She stirred, then appeared to jerk, as if she had been surprised or shocked at her surroundings, before realizing where she was, in a dingy, smelly dungeon, still captive to, in her mind anyway, unknown kidnappers.

"So, another day in paradise?"  It was her response after a minute's reflection.

It was not the response I was expecting, and her tone was not that of a meek girl surrendering to her circumstances.  And it certainly didn't sound like she was angry at me.

"I have to say I've been to slightly better versions of paradise, but it could be worse."

I was not sure how worse it could be, but if my experience of kidnappings on TV was any guide, any lack of response to the kidnapper's demands usually ended very badly.

She got up off her bed and came over to sit next to me.  Closer than I expected.

"I've spent most of the night going over everything I've had to do with Perry in the last month, including his movements, and, it seems, lies.  He is behind this, and I'm sorry I doubted you."  She leaned over and kissed me lightly on the cheek.  "Please don't be mad at me."

I wasn't, and I couldn't be.  "I didn't want to believe it either.  I understand and respect the relationship you have with your brother.  I just hope that it's not true, though the woman in charge of this operation was quite adamant he had a debt to pay."

"Then next time they come I’ll tell them I can pay it and end this unfortunate event.  I'm sure Daddy must be beside himself by now."

I was not quite sure that her simple solution would solve the problem, and the debt was a lot larger than her allowance would be able to cover.

"Perhaps I should have just asked them what they wanted on day one."

Had that been the case, they would have asked her if she wanted to pay his debt, so it seemed to me there was something else in play.  Another question that just popped into my mind was, why didn't they kidnap Perry, and make their demands.  Her father would have been equally happy to pay for his son's release as his daughter.

We both jumped when there was a sharp rapping on the door, followed by a male voice telling us to stand back as far as possible from the door.

A minute after that there was a loud bang and the door flew open, crashing against the wall and breaking the top hinge.  A few seconds later, the whole door gave way and crashed to the floor, raising the dust level in the room.

When the dust had settled, the first person we saw was Suzanne.

"Sorry it took so long to get here.  Are you alright?"

Madeleine crossed the room and gave her a hug.

I could see two very large men in black standing just outside the door.  Mercenaries.

"We're fine, if not a little tired, and hungry for something other than hamburger and soggy chips.  How did you find us?"

"A little rat just needed a little persuasion.  But I'll tell you more about that over dinner." To Madeleine, she said, "your father is due, and will see you soon.  He's not mad at you, perhaps more at me than anyone, but everything is fine."

I think Madeleine was just glad to get out of the basement, which might have accounted for her simply leaving with Suzanne without another word.

I left with the mercenaries, a rather cool moment I had to say.

- February 01, 2021
For a story that was conceived during those long boring hours flying in a steel cocoon, striving to keep away the thoughts that the plane and everyone in it could just simply disappear as planes have in the past, it has come a long way. Whilst I have always had a fascination with what happened during the second world war, not the battles or fighting, but in the more obscure events that took place, I decided to pen my own little sidebar to what was a long and bitter war. And, so, it continues... Leonardo was a fool, not that any of those who followed him would say that to his face, but all of them knew it and accepted that he made the best leader. The reason for that, they all knew if anything went wrong, then the leader would be the first to be held accountable. They all also knew that what Leonardo had done to Martina and Chiara, and the cold-blooded murder of the villagers, justifying it by saying they were collaborators, was also wrong, and had refused to take part in it. Leonardo j
Read more

- January 14, 2021
For a story that was conceived during those long boring hours flying in a steel cocoon, striving to keep away the thoughts that the plane and everyone in it could just simply disappear as planes have in the past, it has come a long way. Whilst I have always had a fascination with what happened during the second world war, not the battles or fighting, but in the more obscure events that took place, I decided to pen my own little sidebar to what was a long and bitter war. And, so, it continues... It didn’t surprise Johannesen there were about twenty prisoners down in the dungeons, though he was surprised to find that the dungeon area was quite large, and in several sections.  The fact they smelled of wine told him that once, the cells were used at storage areas for bottles of wine. Several of the cells that were furthest from the downstairs entrance, and recently boarded over caused several overzealous resistance fighters of Leonardo’s to start smashing walls looking for it. Johannsen tr
Read more