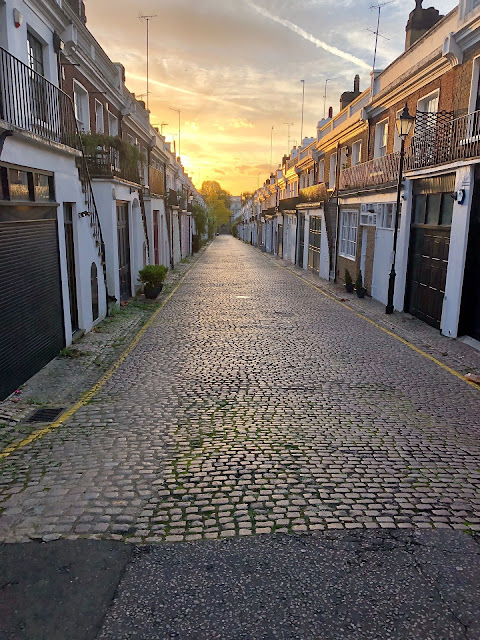 Mary wasn’t her name as much as he didn’t think it was Marion either, and Henry thought to himself he’d probably never get that close.

She was the perfect enigma, the sort of woman you saw in the movies, completely self-sufficient, with no flaws and definitely no requirement for a man in her life, well, not a permanent one.

But, then, for a moment, he had to wonder why he was thinking like that.  This was just a job, and she was just a partner in, what, crime?

"I have to pick up a computer."

"That doesn't sound like something you would need help with."  In fact, if he was right in his assessment of her, he was the last person she needed, if at all.  She looked to him as if she could handle anything.

"It's one of those just in case situations."

They walked a circuitous route back to Park Lane and crossed both roads, up Deanery Street, left where Tilney Street veered off, and then a short distance to Deanery Mews.  Henry noted this was an area with a lot of expensive real estate, and scattered Embassies.  If he was not mistaken, the Dorchester Hotel wasn't far away.

Walking down the mews seemed to Henry to be walking into a trap.  When he looked back towards Deanery Street, he thought he saw two men position themselves, not quick enough to prevent him from getting a glimpse of them.

"You do realize that getting back out of here could be a problem."

No visible sign of fear, or of what the consequences might be if this went south.  Perhaps his grandfather had considered this a test.  But what sort of test?

They reached the end, and, just around the corner, a van was parked with what Henry assumed was the driver, standing by the open driver's door, smoking a cigarette.

There was no visible sign he was carrying a gun, but Henry was new to the job, and didn’t know all of the ins and outs of disguising whether you were carrying or not.  He wasn’t wearing a suit, so the chances of hiding it were lessened.

Unless it was tucked into the back of his trousers.

Mary stopped about ten feet away from him.  "Have you got the package?"

He reached inside the car and lifted a computer case.  There didn't necessarily have to be a computer in it.  I looked up and around.  It was a good place for a meeting.  No witnesses.  But there were CCTV cameras.  I wondered if they were working.

The man tossed the bag back in the car.  "Have you got the money?"

She held up her phone.  "Just need the bank account details."

She moved closer, and in a flash, he grabbed her, holding her by the neck with a gun to her head.  Yes, tucked away behind.  But in those few milliseconds, he was concentrating on taking her, Henry moved closer.  Not too close, but close enough.

And those two men Henry thought he'd seen at the top of the mews were now within sight, and both had guns trained on him, but keeping their distance.  A trap, indeed.  And maybe a slight problem when the shooting started.

"What do you want?" Henry asked.

I shook my head, not to clear the cobwebs, but to calm down and think rationally.

Talk first, possibly distract, or just check his mettle.  "Surely there's a better way to do this.  You don't need to hold a gun to her head."

I held my hands out just to show I wasn't a threat.

"No, there isn’t."  But, incredibly, he released his grip on her neck slightly and moved the gun away from her head.

He had adjudged me as not too much of a threat.  Not with two guns trained on me.  It all depended on their accuracy over what I deemed to be just too far.  If I was wrong, it might just be the last time.

But for what was supposedly a professional, it was an unbelievably bad mistake.

Henry reached out for the man’s gun hand as Mary swivelled slightly, manoeuvring herself behind him.  In that surprise of the moment, the gun easily came out of his hand into mine and I aimed and shot at the two men who had hesitated because there wasn’t a clear shot at either of us.

Or they didn’t think they could hit us cleanly and might shoot their boss.

A mistake on their part for being just too far away.  They should have kept walking towards us.  They didn’t, and it would be the last action they’d be involved in.

Henry didn’t miss.  All that practise at the shooting range had paid off.

Attention distracted for less than a few seconds when he checked on Mary, she had the man safely under control.

Their roles were reversed.

“Give me one good reason why you shouldn’t join your friends,” she said, quite calm considering the circumstances.

“Just doing what I was told.”

“The computer’s not there is it?”

She shook her head and held out her hand.  Henry presumed she wanted the gun and handed it to her.

She reached down, after he slid to the ground, and took his mobile phone.

Henry watched her check the last caller, and then press ‘ring’.

When He heard a voice on the other end, she said, “The deal has changed.  You bring me the computer, or you will join your friends here.”

He heard the voice speak a few words, none of which were understandable.

Her reply, “I hope you know a good undertaker.”  Then she disconnected the call, pulled the phone apart and tossed the pieces up the alley.

Her phone rang, she listened, then hung up and put it back in her pocket.

“What next?  We go get the computer.”