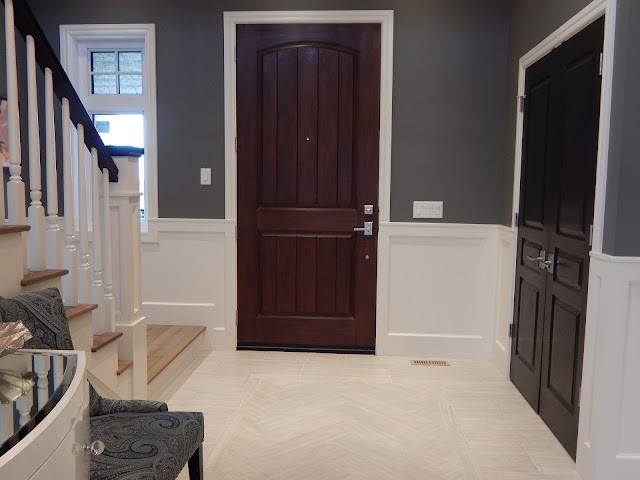 There was a moment when I had at least a dozen thoughts, most leading to murder.

Perhaps it was good that I was not a violent person, and, given that one of the adulterous parties was the woman I had loved for many years, I guess, in the end, I was just going to struggle with the why.  Why now, or had it been going on all this time?

The front door closing, and the car departing, woke me out of a reverie.  I got up and looked out, expecting to see an empty foyer, but instead saw Janine, in a dressing gown, still holding the front door handle, as if transfixed.  A beautiful memory of what had just happened, or a tinge of regret, and another secret to be kept in her head, one I knew now, held so many others.

I decided to make myself known, now rather than later.

"Do you come home often during the day," I said, standing in the doorway where she could see me.

She jumped, perhaps in fright, or in guilt, it didn't really matter.

She turned.  "Daniel.  What are you doing here?"

"I resigned this morning.  A difference in opinion on how the company should proceed.  I was escorted out, and decided to come home.  I should have gone to a bar."

She knew that I knew, so it would be interesting to see what she had to say.  I could see her forming the words in her head, much the same as she did in a court of law.

"It was the first time, Daniel, an impulse.  I'm not going to make an excuse.  It's on me.  I wanted to find out what it would be like."

And that made me feel so much better.

"Well, it's a hell of a fortieth birthday gift, Jan, and one I guess I couldn't give you.  I trust you didn't grant that wish to any of the other men who may desire you?"  OK, that wasn't exactly what I meant to say, but the words didn't exactly match what I was thinking.

"You mean do I sleep with every man I have a desire to?"  A rather harsh tone, bordering on angry.  She was angry with me.

"You tell me what I'm supposed to think."

"I had sex with one other man, no one else, since the day we were married.  It was a mistake, and I'm sorry.  If you hadn't been here, we wouldn't be having this conversation."

"Washington," I said, almost to myself, a light bulb lighting up in my head.

The memory of a distant conversation, on a holiday, when we visited Washington, Philadelphia and New York.

"What about Washington?"  A change in her expression, slight, but I could see it.  She remembered it too.

"Remember that time, at one of those monuments, probably Jefferson's, when you said something rather odd, and when I asked, you brushed it off as nothing important.  You were looking out over the water and said it was one of your fondest memories after, and then stopped yourself.  Michael had just married when he moved to Washington, and you were there too, for a while.  I suspect now you and he had an affair, and it ended badly as affairs do and the woman has to leave.  There's always been that bond between you.  Not the first time Jan.  The affair never ended."

I stepped out of the office and walked down the passage and come out into the foyer.  Two stories high, it had been a debate whether to have a fountain in the space adjacent to the stairs or a statue.  The statue won, I lost.

Close up, I looked at the woman I'd loved from the moment I first saw her, and of the surprise when she agreed to marry me.  I had no idea then I was the second choice.

"I'd say I'm on a roll.  Lost my job, then lost my wife.  Bad luck comes in threes, so I'm going to lose something else."  I looked around.  "This house?  I don't think I could stay here, not now.  It would just be a reminder of everything bad that's happened to me today."

"It doesn't have to be that way.  I told you it was a mistake.  I made my choice twenty odd years ago and it hasn't changed."

She took a step towards me, and I took one back.  The thought of being close to her now, after what she had just done, didn't feel right.

"Look, before you do something silly, let's sit down and talk about it."

"No.  There's nothing really to talk about.  I'm sure you can come up with a very convincing argument that will justify everything you've done, and why I'm being a fool, but the truth is, there are no words that can justify what you just did.  Yes, I could forgive you, and believe me, I want to, but there'd always be some resentment and the fact I could never trust you again, even if you promise not to.  What's done is done.   Have a great birthday, and party, and make up some excuse for me not being there, but I'm going away for a while.  You have got everything you ever wanted Jan.  Be grateful for that."

With that, I turned and headed for the door that led to the garage.  I wasn't going to leave by the front door.  I expected her to say something, but she didn't.  I expected a reaction, but there was none.  What choice did I have?

In the car, I found myself heading for the airport.  I couldn't go to my parents, they were dead.  My sister lived on the other side of the country, and all I would get from her if I told her what happened would be an I told you so, so it was down to my brother, who had moved to the UK to get away from everyone.  I called him, and when he answered, I simply said, "I'm coming to see you for a while."

And he replied, "It was Washington, wasn't it?"

He'd know who she was, and who Michael was when he saw them together all those years ago.  And tried to warn me before I married her.

What was it with politicians and women?