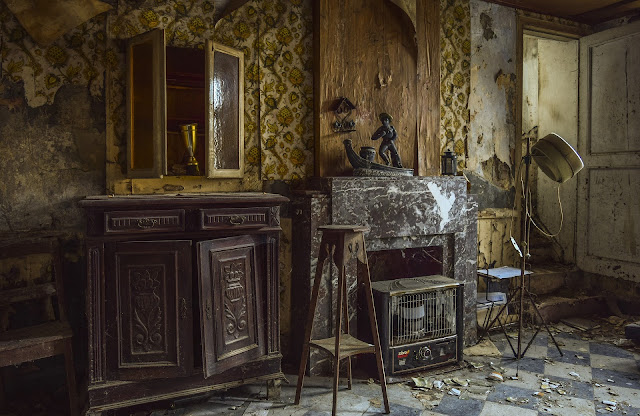 We both heard a key being inserted into the lock of the door to our room, and it turned, the sound as the locking mechanism moved with a heavy clunk.
Lack of use, or just heavy-duty?
It didn't matter.  The door swung open silently and a large man filled the door frame.
No way of getting past him, so escape by either of us was out of the question.
"You."  He pointed at me.  "Come now."
When I didn't move quick enough, he took a step forward into the room.  Then he stopped and said, "we can do this the hard way if you like."
Big, big man with muscles on muscles, I could imagine what the hard way entailed.  Violence and a great deal of pain.
"She stays.  Come now."
I looked at her.  "No doubt I'll be back soon,“ I tried to sound reassuring and failed.
I let her hand go and stood, then followed the man outside, waiting until he relocked the door.
This man, I noted, was not Chinese, but more than likely Russian or from what used to be the USSR.
I walked in front of him along the passage, every few seconds giving me a little shove just to remind me he was there, and in charge. There was no escaping him, but it didn't mean that I stopped planning an escape.
At the end of the passage was stairs leading upwards, lit only by a dingy low wattage lightbulb.
His hand on my shoulder turned me towards the stairs, and the slight shove the order to go up.
I could have attacked him going up the stairs simply by turning and shoving him backward, but there was no value in doing so because I didn't think it would incapacitate him. Worse still, there were guards still downstairs, so getting back to Madeleine and getting past them would be too difficult.
Perhaps that was why he kept back about three steps behind me and had a good grip on the railing.
Before I reached the top step, the door opened and the man, another Russian perhaps stood to one side.  The man behind me stopped on the top step.
They spoke in a foreign language, not Russian, a handoff.  Then the man on the step went back down again, and the other man shoved me in the direction he wanted me to go.
Down another passage until a large hand grasped my shoulder and stopped me.  He could have just said stop, but I think his intention was to tell me not to try anything.
We stopped at a door which he opened and thrust me through, quite forcefully almost to the point of falling flat on my face.
The door slammed behind me as I steadied myself back into a standing position, noticing at the same time, sitting behind a large ornate table, a woman.  Middle age, fake blonde, inscrutable expression.
She would make an excellent guard in a women's prison, which just might be her vocation.  I didn't see her teaching kindergarten children, though if the two male guards I'd just see were anything to go on, I might be wrong.
"You are Michael James?"
Right first name, right last name.  She knew who I was, but that wouldn't be difficult.  She had my phone and wallet.  She had Madeleine's bag and phone on the desk in front of her too.
She seemed to wait for me to agree.
"Come now name, there's no need to be churlish, that it the word is it not, churlish.  She said it twice like it was a word she hadn't heard before but would use it again.
"Why ask questions you already know the answers."
I'm not sure I should be so uncooperative, but it seemed I had no other cards to play.
"Humour me."
I wasn't so sure this woman had a sense of humor.
"I'm not sure kidnapping is something humorous, except perhaps in your twisted world."
"Come now, Mr. James, it wasn't my idea to accompany your lady friend.  You consciously made that decision yourself.  Admirable, perhaps, but foolhardy because you could become what we might call collateral damage."
"Then why am I here now?"
This was not how I expected it would go, bantering with the head kidnapper.  Or wondering what her story was that she had to kidnap people, except of course for the money.
"We have a problem convincing Madeleine's father.  Rather than have a hysterical woman, I thought you might help us out here."
Which, obviously, they had tried the obvious tactic of calling him using her phone, making their demands, and met with a crusty father whom I had no doubt simply hung up on them.  Or he had asked to speak to her, and for some reason, they hadn’t allowed it.
It explained why they’d taken me.  I could be of use to them.
Time, I thought, to push my luck.