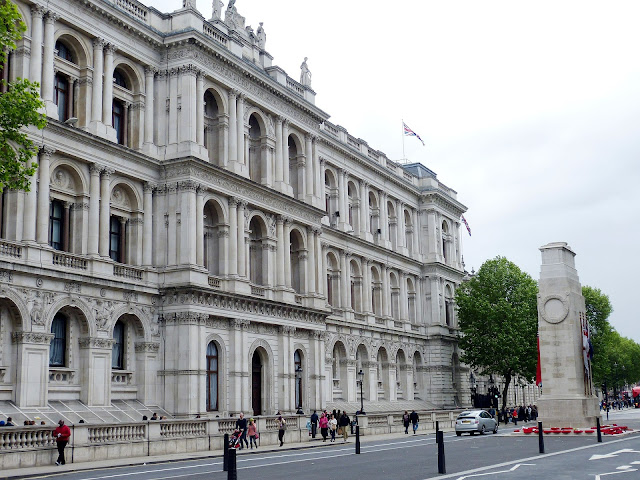 Five minutes, and a backlog of customers, a new clerk, her name tag 'Betty', arrived and began processing the others.  I could see behind me, the Concierge picked up the phone and while listening, he was looking directly at me.

When he hung up, he disappeared into a back room, and when he returned there was another man with him, one that looked like a plainclothes detective, and as they were talking, they were looking at us.

Two suspicious people turn up with no luggage.  It was still at the airport, I’d intended to have it delivered to Cecile’s flat, but it was clear we would not be able to stay there.  Should I go over and ask him to arrange for its delivery?

I was about to go over to him when Wendy reappeared with an envelope in her hand.

She passed it across the counter.  "This was left for you two days ago.  We also have a reservation in your name.  I assume you are here to check-in?"

I looked at Emily and she nodded.

Knowing how check-in worked and having to prepay for the room, I was pulling out my credit card to pay, hoping it wasn't going to cost a small fortune.

Wendy saw me, and said, "The room has been paid for a week, sir.  It's next to your friend's room."  I saw her process two keys and then handed them to me.  "I trust you will enjoy your stay."

I put the envelope in my pocket, and we crossed to the elevator lobby.

While we were waiting for the elevator, Emily said, "She was anticipating your arrival."

"More likely hoping I would come."

"Your sister and I had a falling out before she left to come here.  We were supposed to get through the internship at the company before making a decision of what would happen next.  I had thought we might get married, but she didn't quite want what I thought we both wanted.  It's basically the reason why she came here.  It's also the reason she found someone else, I suspect.  I refused to come over and join her."

"Three months ago.  I'm sorry but I didn't tell anyone.  I was still coming to grips with having my hopes dashed."

The lift doors opened in front of us, and three people stepped out, one of who gave me what I thought was a curious look.  The elevator empty we stepped in and I pressed the floor button.  The doors almost closed when an umbrella end was thrust in, causing the doors to reopen.  A man in a pinstripe suit and bowler hat stepped in.

"Sorry, thought it was empty."

The doors closed.  He didn't press any button so I assumed he was going up to the same floor as us.  He had what looked to be a key in his hand, so was another guest.

It didn't stop my imagination working overtime.  I gave Emily the 'don't talk' look hoping she understood what I meant.

The elevator jerked to a stop and the doors rattled open.  The man with the umbrella dashed out and turned left, striding purposefully up the passage.  We stepped out and checked to see which way the room was.  The opposite direction, thankfully.

Emily didn't say another word, but for the length of the passage, until we reached the room, she looked over her shoulder several times, perhaps looking for the man in the pin-striped suit.
I used the key to open the door, ushered Emily in, and then looked up and down the passage to see if anyone was about, then stepped in and let the door close.

"What was that about?" she asked.

"Did it strike you as odd that he waits until the last second to get in the elevator?"

"Probably a man in a hurry.  Are you going to be suspicious of everyone?"

There was nothing in the room.  Smallish, twin beds, an expensive mini bar, and towels and toiletries for two.  And it was quite warm.  Like most old places, the warmth came from a hot water radiator underneath a fading painting of rural England.

Everything looked as though it was as old as the hotel itself.  I thought I could detect the aroma of metal and wood polish.

I pulled the envelope out of my pocket and sat at the end of the bed.  On the front, it said 'to be hand-delivered' with my name on it written in Cecile's writing.

Clue number two in what was beginning to look like a treasure hunt.

"James,
Well, if you're reading this, it means matters have gone from bad to worse, not that I thought they could.  Enclosed is a card with Jake's last known address on it.  I had a choice of two and went to the other.  I suggest you start there and find Jake.  He will know where I am.
Cee"

Emily looked at me.  She had read the note over my shoulder.  "Seems we have a mission,  Shall we go?"
It was that precise moment there was a knock on the door.  Not a friendly knock from room service or housekeeping, a knock that had trouble behind it.
I looked around the room, not sure why I was doing it, because there was no escape hatch, nor would we be going out the window.
As my eyes returned to the door, Emily was already there, hand on the handle.  It was too late to say no.