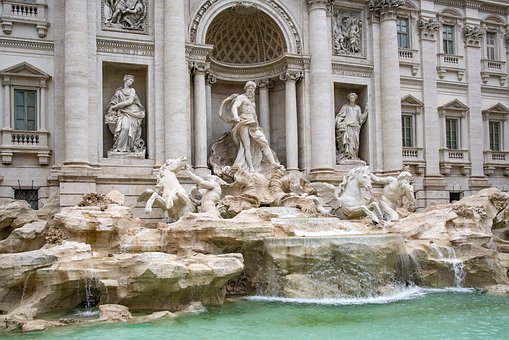 I'd seen the Trevi Fountain in the movies, but, until now, it just seemed like any other fountain, only larger.

In reality, it was much more than that, and, so it seemed, it was also that for many other people.  Mid-afternoon on a warm sunny day, they were all standing in awe.

Perhaps some were making a wish, and I saw several toss coins in.  There would be a lot of money in there and I couldn't help but think about what sort of job it would be to retrieve it.

Odd too, I thought, if they hadn't, how many old and rare coins might be somewhere on the floor.  Of course, I only thought of the aesthetic value rather than the practicality of the water system that the Romans had built long before such feats of engineering were being contemplated.

No, I was here on holiday.

After years of travelling to a great many places for my job, one that never really gave me any time for sightseeing, I'd decided it was time to indulge in a little tourism.

Before this, I'd been to the Coliseum, the old ruins, the Spanish steps, and the Parthenon.  This was going to wrap up the afternoon.

"So, are you here on business or pleasure?"

I turned to see Giuseppe, a man I'd had a rather complicated relationship within the past and one who was not told I was coming.

But, the fact he was there was no surprise.

It was however surprising that he could sneak up on me.  It showed I was slipping, or, more than likely, I was more susceptible to being distracted.

"I am but a humble tourist.  I'm sorry but you have been following me for nothing."

"Why is it I find that difficult to believe?"

Maybe because of what I used to do, but it was not something I would openly admit.  And the only reason he was standing there was that someone else had made a mistake, and required a bit of diplomacy to smooth the waters.

Unfortunately, that had destroyed my invisibility in Italy, and probably most of Europe, and these days I spent most of my time in semi-retirement driving a desk.  Not entirely put out to pasture.
"As difficult as it might be, having your cover blown makes it impossible to continue, verified by the fact you're here now.  Was it a red flag on my name, or facial recognition?"

A last shake of his head, he walked over to a car parked a host distance away, got in and drove off.  I had no doubt he was not the only one who had been watching me.

"It seems you were right."

Another voice, This time a woman, and expected.  Carla had been waiting in the coffee shop for Giuseppe or someone like him to make an appearance.

"They were not exactly hiding the fact they had me under surveillance."

She handed me the coffee with a smile.

"That means we can have some fun, does it not?"

That had been the plan.  I knew if I entered Italy using the identity I used the last time, it would put them on alert, and prompt a reaction.

"It still doesn't mean they won't suspect something is afoot."

"And since when did you start doubting yourself?"

Since my last operation fell apart because I made one simple mistake that no agent would have made in a million years.  But, I had, and it basically ended two careers.

The other person had just handed me the coffee, and unaccountable seemed less angry with me than she should be.

"You of all people should know the answer to that."

She sighed and took my hand in hers.  "What I do know is that there's a very clever operation afoot and you're the one who planned it.  And far from being on the sidelines, we have a new and very important role to play.  And speaking of play, it's time you and I got into our roles.  Oh, and just for the record, I still love you and I know how you feel about me, and before I brought you coffee I made a wish."

So had I, and it had been answered.