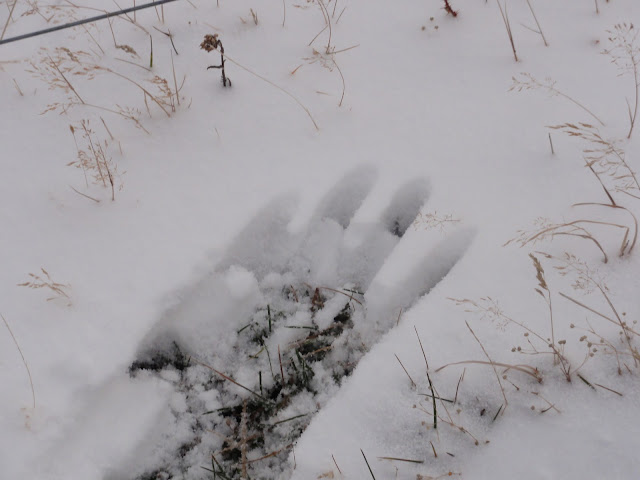 It had stopped snowing about an hour before I arrived at the cabin, and there were no other tire tracks leading off the main road, and up the track to where this, and several other cabins were located.

I'd checked before coming, and no one else was going to be up here for the weekend.

There were paw prints nearby, that of a rabbit or perhaps something a little larger, but definitely not something with a hand.  Yet there were no human footprints.

So, perhaps I was wrong.

I looked over towards the tree line, and then along it, as it disappeared behind the last of the cabins.  Nothing.  It was, I guess, my imagination running wild.

Nor could I explain why I stopped the car at that exact point on the track because you had to be almost standing over the print to see it.  With a shake of the head, I got back in the car and drove the last fifty feet to park under the shelter beside the cabin.

A last look around, after I finished unloading the supplies, I went inside.


I'd had a rather tumultuous last few months, having penetrated and broken up a very successful group of international counterfeiters, and a long debrief following the arrests.  My boss had then told me to disappear for a while to recuperate, somewhere away from the humdrum of normal life.

I never spoke about it, and as far as I was aware, no one else knew about it.

I'd lit a fire, brought a rug out from the bedroom and made myself comfortable by the fire.  I was still not used to sleeping on a comfortable bed, and lately, it took nearly a whole bottle of scotch just to get to sleep.

This night, it took only three quarters.  I was, I thought, getting better.

I still kept one ear open, the bane of the uncover agents, always expecting to be found out.  It would take a long time, if ever, to break free of that.

I stood quickly, taking up the gun as the blanket fell to the floor.  Another bad habit, going to bed with a gun.

Then, a knock on the door.

No one else was supposed to be here.  My mind ran through several possibilities, ending on the last, which by all accounts should be impossible.  Someone was here for retribution.  We had found all of the leader's bar one.

It was a gentle rapping, not a pounding as I'd expect from an angry man.  It still could be, so I approached opening the door with care, and the gun ready to shoot.

I opened the door a few inches and immediately felt the incoming cold air.  Outside, I could see the back of a slim person in an anorak over a fur-lined coat.

The figure turned, and it was a woman, not young, not old, her age for the moment indeterminate.

"Mr. Fleming.  I'm sorry, but I have a rather awkward request to make.  Do you have any matches?"

"Oh.  Come in.  It must be cold out there."  I stood to one side and opened the door so she could come in.  Once inside, I closed the door, but the time it had been open had cooled the inside of the cabin considerably.  I shivered.

She saw the gun in my hand.

"Again, sorry.  No one supposed to be up here this week."

She stood by the table, entwining her fingers nervously.  "It was a last minute thing.  My sister arrived on my doorstep and said she needed a break.  A bad break up with a dreadful man apparently."

I went over the kitchenette and opened the cupboard.  I reached in to get the matches, and, as I turned back towards her, she was standing behind me.

With my gun in her hand.  Pointed directly at me.

I put the matches down, and slowly raised my hands.  "I must say, this is something of a surprise."  I tried to remain calm and started working on an escape plan.

"Outside is he?  The old 'send in a pretty face to distract me' trick?"

That turned into a scowl thirty seconds later when she was lying face down on the floor with the gun barrel on her neck.  And the fact I wasn't too careful when her head hit the floor.