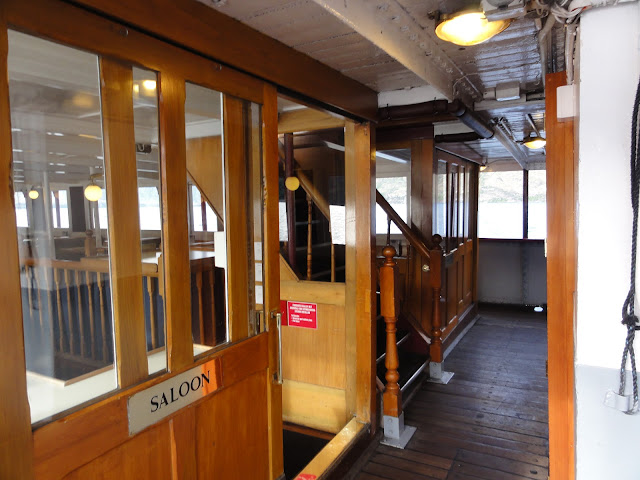 I had just had a blazing row with Abigale, a girl I had known for nearly a year, and it was our first holiday together.

It had been going very well until she received a phone call, one she said she needed some privacy.  I thought nothing of it at the time, but the next day I saw her ex-boyfriend.

I knew it was him, he had a very distinctive haircut and thought it was quite a coincidence that he was here at the same time.

Normally stuff like that didn't bother me, but when she disappeared without telling me where she was going, I put two and two together.

I broached the subject, she went all defensive, we said words we shouldn't and I left.

We were not far from a wharf, and a boat, and about to leave on the morning cruise of the lake, I bought a ticket and went on board.

It was an old steamship, very quiet unlike its diesel counterparts, and after a brief exploration, I found the saloon on the lower deck, empty, and went in.  A seat in the corner, and time to think about what I was going to do.

Pity there wasn't a bar where I could pour out my troubles to a sympathetic bartender over a few double Scotches.

The seats were comfortable so I stretched out, closed my eyes, and felt the gentle rhythm of the ship's propellers moving it through the water.


I was not sure how long I'd been asleep, but it didn't feel like a very long time.  Outside, I could see the shoreline of the lake, mountainside soaring skywards disappearing into the low cloud.  It had been raining.

But now, unlike before, I was not alone.  Two seats across sat a woman about Abigale's age.  One glance and I took note of several differences, Abigale long blonde hair, this woman a shock of unruly red hair mostly clamped under a knitted hat, Abigale thin and athletic, this girl probably hated exercise as much as I did.

I was not quite sure why I was interested in the differences between them.

When she turned to look in my direction our eyes met.  She smiled.

"I was unaware I was asleep."

"You were.  I thought it odd since I was given to understand people go on this boat to see the views.  They are quite magnificent."

Something else to note, she had an engaging manner and a voice that demanded you listen, but in a good way.

I was tired and not in the mood to have a pleasant chat about the scenery.  The recent argument was still at the front of my mind.

"Yes," I said and went back to looking out the window.  It was rude.


I checked several times over the next hour and noticed she had returned upstairs, perhaps realizing that I was not the chatty type.  Any other time perhaps I might have been.

When the boat started slowing down, I realized we had arrived at the first port of call.

That's when I saw her again, slowly descending the internal stairs that ended not far from where I was sitting.

"We meet again," she said, showing no signs of animosity.

"Are you going to the farm?"

A few seconds later I remembered the first stop was a farm where visitors could stay for lunch, and watch demonstrations of a real farm at work, and have a look at a few animals, such as alpacas, up close.

At which she wrinkled her nose, an interesting expression telling me I was trifling with her.  "Down here?"

She came over and sat next to me.  Not too close, not too far away.  "Paradoxically," she said, "neither am I or at least I don't want to be my usual self."

I knew I shouldn't ask, but did anyway.  "Who do you want to be then?"

"Somebody who isn't dying."