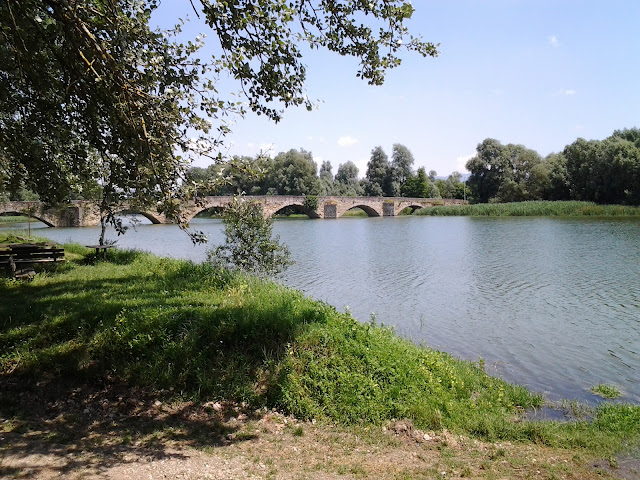 We'd come on a holiday to get away from the pressures at home, but it seemed no matter how far away we were, they were still simmering below the surface.
It was my idea to come to Italy, and in particular, Tuscany.  Monique was neutral, but she had intimated she wanted to go to Paris to visit her relatives, and this had been planned for the next week.
Now, the fourth day of seven in Italy, she was getting restless, and irritable.
We'd been to a winery, had a magnificent lunch, and we were heading towards Arezzo.
The tour guide had pulled the minibus off the main road and into a layby where we could, he said, get a better view of the 'Ponte Buriano'.
Monique was not interested in Ponte's, bridges, in Italian, English or any other language.
I shrugged and got off the bus with everyone else.  She remained seated, defiant.
In his rather quaint English, the guide told us, "This is the river Arno, and the bridge, with seven arches, is the Ponte Bruiano.  It is said it has been here since about 1277, and it provided inspiration for Leonardo da Vinci in the painting of the Mona Lisa, and in fact, appears in the painting.  For those who might be going to the Louvre, where the painting is, you might want to check for yourselves."
We would be if there was time, so I would.
I looked back at the bus and noticed she was not on board.  A quick scan showed she was not with the other passengers.
Curious, I strolled back to investigate.
Before reaching the corner of the bus I could hear a voice and took a moment to recognize it was Monique, on her cell phone.  She told me she had left it back in the room.
"No, I haven't told him.  Yes, I will, when the time is right.  Of course, I love you, you know that.  I had to go on this trip, he's been looking forward to it for months.  Don't be silly, our marriage has been broken for over a year now.  I hear the others returning.  I have to go.  Love you."
Aside from the shock, it was the first time I'd heard her sound happy.  I'd known there were problems between us, but not to the extent she had found someone else.  It explained a lot, the surliness, the absences, at times the lies.
I nodded to the others as they passed by to get back on the bus.  I think they were tired of her attitude as much as I was.
Last to get back on the bus, instead of sitting next to her I went to the back row and sat on my own.  The others pretended not to notice, and Monique, she was surprised.
So much so, she came back to join me.
"What are you doing?" she asked, not necessarily in her politest tone.
"Trying to avoid yet another argument."
"What now?"
"You brought your cell phone.  Had you said you couldn't live without it, I might have overlooked it, but..."
I didn't need to say anything more.  The significance of my statement hit home.
"Oh, and consider me told, right or wrong time.  Now go away and leave me alone."