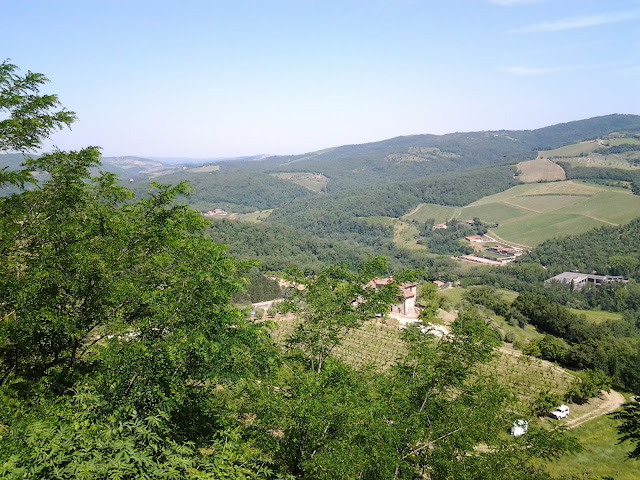 
"I've taken the villa for three months," I said, standing near the rear wall, overlooking the valley that gave a great view of the vineyards below and the hills in the distance.

It was nothing like the view I had back in Clapham.

It was nothing like the overcast skies, the cold, the continuous rain, and the depressing thought of having to live another day in that hell hole I called a bedsit.

Beth was impressed.  She'd visited me one in Clapham, and said that once was enough.  "How did you find this place?"

Actually, it was a lot more complicated than that, but it was as much as I was willing to tell her.  The truth was, after the last time I saw her, I didn't think I'd see her again.

I had to wonder if it was simply because I'd taken the villa that she was here, expecting a free holiday.  I cursed my brother because it was he who told her after I specifically told him not to tell anyone.

It was a view I was not going to tire of.   The scenery, and of her.  I had thought we had something in common, but it seemed she was more interested in my friends rather than me.

I went back inside and rescued a bottle of wine from the fridge and two glasses  The owner of the villa had left a dozen bottles of local wine for me to try.

We sat at the table and I poured the wine.

"I have to say I'm surprised to see you here."

"I was at a party and saw your brother.  He was telling everyone how you had were such a lucky son of a bitch to get this place.  I think he was a little jealous."

Yes, I could imagine that being the case.  He had harbored a desire to spend a summer in Tuscany for a long time but never had the time or the money.  But, being the sort of man he was, he would never have either, or the wherewithal to do anything about it.

"I had some days owing and thought I'd surprise you."

Consider me surprised.  She'd arrived with a suitcase so it was not going to be a short visit.

"The problem is I'm off to Florence tomorrow to spend a few days with a few old university friends who are doing some ancient Roman research, and sadly the terms of the lease don't allow for anyone to stay unless I'm here."

"The last time we spoke Beth, you said you could not see a future with me, that our interests going forward were not, I believe the word you used, 'aligned'.  I can't see how, in the space of a fortnight, that has changed dramatically, do you?"

I had been disappointed, but not dramatically so.  She had intimated more than once that we were not particularly 'compatible'.

"I was having a bad week, Sam, that's all.  I'm not sure what I want, much less try to defend my choices.  You've met my parents."

Her parents were a convenient excuse for a lot of things, but her father had told me the first time she introduced us, that I should hold no aspirations towards a lasting relationship with her.  We were, he put it as politely as he could, from different social spectrums.

No matter what she thought, or wanted.

"Generally when we say the first thing that comes to mind, it's generally the truth.  The truth is I told my brother not to tell you where I'd gone.  I need time to clear my head and consider my future.  It's not back in London, it might be here, it might be somewhere else."

"It didn't seem to be working back home.  There's no reason to think there will be any change here.  Changing the location isn't going to solve the problem, not with us, and definitely not with your father's attitude."

"It was.  About you, and about aspirations.  At least he has the courage to say what he thinks."

"You do not have the courage to admit to yourself what the reality of your situation is, let alone anyone else.  To be honest, I would not want to be in your shoes.  We can be friends, but that's as far as it will ever go, not until you become the master of your own destiny."

Not, I'm sure, what she wanted to hear, but it was time someone told her.

"So, I'm going to Florence for a few days to meet up with some friends, people you know by the way, so if you want to come along I'll be glad of the company."